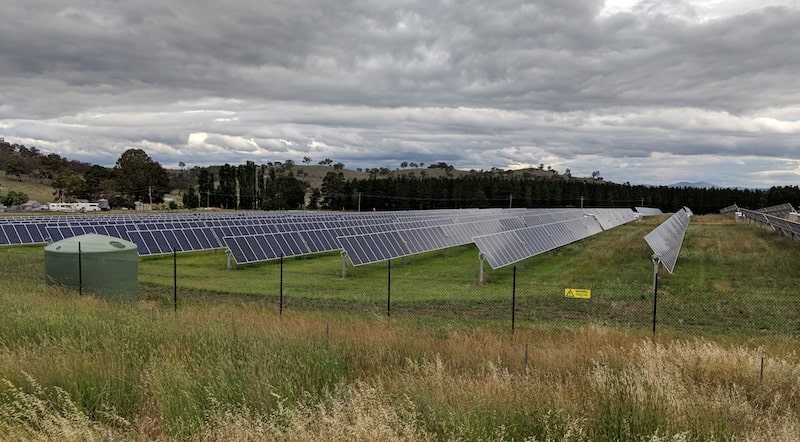 The Greenest government in Australia’s history sits in the heart of Canberra. We have set a net-zero emissions target for 2045. We are powered by 100% renewable electricity. We are phasing out the use of fossil-fuel gas, incentivising the uptake of electric vehicles and changing the building code to require more climate resilient housing and workplaces. This isn’t just a hopeful vision of the way things could be; it is today’s reality in the Australian Capital Territory.

Here in the ACT, where the Greens share government with Labor, we are demonstrating our hope through our action. Since I contested my first election in 2008, the Greens have held balance of power in the ACT Legislative Assembly and over the intervening 13 years, our small territory has led the nation on climate action and secured significant shifts toward net-zero emissions and a sustainable way of life. In 2010 we were the first Australian jurisdiction to legislate emissions reduction targets that we are now meeting, and in 2020 we achieved our target of being powered by 100% renewable electricity. Over time we have increased our ambition and updated our emissions targets to reflect the latest science. In 2019 the ACT declared a state of climate emergency, acknowledging the need for urgent action. And this year we were the highest level of government in the world to join the call for a global fossil fuel non-proliferation treaty.

One of the most inspiring experiences in the ACT has been the consistently strong community support for climate action. Surveys show that 80% of people in the community support the ACT Government taking strong and urgent action on climate change. It is thanks to the support and advocacy of our community that this increased ambition has been possible. We are also fortunate to have many great community-led projects including an electric bike library, programs to encourage active travel, a community solar farm, neighbourhood micro-forests, park care groups and electric vehicle advocacy and education programs. Our story is not just about government leadership, it’s about the whole community taking action to shape a better future, and that’s what makes it powerful.

All action is borne of hope. That’s why I believe climate hope lives in every one of us and the actions we take. Climate action, and therefore climate hope, is everywhere you look. Of course, our global community has a long way to go, but pausing to appreciate the challenges we’ve already met nourishes our hope for the future.

These are difficult times for those who understand the seriousness of the climate crisis we face. Progress is too slow, powerful industries continue to block positive change, and many of our politicians seem to lack the courage to do what is sorely needed to avert a climate disaster. Many of us can see that without transformative change, our society and the natural systems that support us face an uncertain and dangerous future. Still, as difficult as this situation is, there is no time to waste on despair or despondency. The climate crisis is bearing down upon us now. Our hope must rise up to fuel our action.

Every day we see examples of people rising up to demand action from governments and corporations, we see some governments decarbonising and building climate resilience, and we see socially responsible companies taking action to cut emissions.

All over the world we see young people demanding action through the youth climate strikes, now a massive global movement of those whose future is at stake. In central India the Adivasi people are mobilising against the proposed takeover of ancestral lands for coal mining by the Adani Group. Globally, the number of electric vehicles has increased from 17,000 in 2010 to 7.2 million now. And the United Nations Race to Zero campaign has mobilised a coalition of cities, regions, businesses and investors in the largest ever alliance committed to achieving net-zero carbon emissions by 2050 at the latest.

In Australia, all states and territories have committed to net-zero emissions by or before 2050 and many have set interim targets for 2025 or 2030. We recently saw the Federal Government reluctantly agree to a net zero by 2050 target after much pressure from state and territory governments, industry and the community. While net-zero by 2050 doesn’t go far enough, the fact that the Business Council of Australia and the National Farmers Federationjoined the call for a 2050 target shows we have come a long way.This would have seemed highly unlikely just five or ten years ago. Of course, what we need next is a national 2030 target that aligns with the goals of the Paris Agreement, and meaningful action to get there, and we will continue to advocate for this. Governments have a responsibility to act in the interests of their communities; therefore, they have a critical role to play in facing the climate crisis and rapidly cutting emissions. The wellbeing and survival of people and of other species must be paramount in government decision making. After all, what is a government for if not to safeguard and advocate for the wellbeing of its constituents? That’s why responding to the climate crisis, and continually ratcheting up ambition, remains a central focus for me.

When we first legislated emissions reduction targets in 2010, we aimed for net-zero by 2060. Over time, as the need for urgent action became clearer, we increased the ambition of this target – bringing it forward to 2050, then to 2045. We also have interim targets to guide progress and ensure accountability along the way. We recently met our 2020 target of reducing emissions by 40% from 1990 levels and are now working to meet our 2025 target of 50-60%. Similarly, our original target for renewable electricity was 90% by 2020, but we increased it to 100% three years later, as technology developed and the scientific evidence demanding urgent action mounted. We are proud to have achieved this target, with the ACT now powered by 100% renewable electricity, cutting emissions from electricity to zero.

When we first set these 2020 targets, many people said they were unrealistic and unachievable. But time and our actions have proved them wrong, and showed that ambition, courage and a strategic approach can catalyse major change that is well beyond what seemed achievable at the time. We need to think big and to have the courage to aim for what we know is needed, not what we are told is feasible right now. People adjust, technology changes and time moves on. We can’t afford to be limited by the status quo. We can, and must, do better than that.

Having decarbonised our electricity sector, our focus is now on reducing emissions from transport, which accounts for around 60% of ACT emissions, and gas, around 20% of emissions. To cut transport emissions we are working to improve public transport, including expanding our light rail network (powered by our 100% renewable electricity) and shifting to a zero-emissions bus fleet. We are also improving our cycling and walking paths to encourage active travel, while accelerating the transition to zero emissions vehicles with financial incentives including two years free registration, stamp duty exemptions and $15,000 interest-free loans for zero emissions vehicles.

Since introducing these incentives in May this year, we have seen a significant jump in the number of zero emissions vehicles registered in the ACT and we’re confident this will continue. The ACT Government is shifting to a zero-emissions passenger vehicle fleet, with all newly leased vehicles from now on to be zero emissions. We are now at 30% of our fleet being zero emissions and that figure is set to increase rapidly, making ours one of the largest zero emissions fleets in the country.

To reduce emissions from fossil fuel gas (our deliberate counter-term to ‘natural gas’) we have committed to phasing out its use entirely by 2045. ACT Labor called it a ‘crazy’ Greens policy during the election, but now that we govern alongside Labor it is the government’s policy. To achieve it, we’re first legislating against the rollout of gas infrastructure to newly constructed suburbs, then banning gas connections at new developments in existing suburbs by 2023. With our 100% renewable electricity supply, by shifting off gas to efficient all-electric buildings we can achieve zero emissions from energy.

We have committed to all new government buildings being all-electric from 2020, and so far, we have three all-electric schools, an all-electric office building and are planning an all-electric hospital expansion. With our cold climate in Canberra, there was some initial scepticism about the performance of commercial-scale electric heating, but our office building has demonstrated that this is entirely workable, leading the way for other commercial buildings to follow suit. This commitment to phase out fossil gas was hard won and took many years to secure. The status quo has power and we had to be persistent in calling for change, but now that we have come this far, we hope that the obvious benefits of reducing emissions and shifting to cost effective, efficient electric homes and buildings will create momentum to accelerate this shift.

The ACT is a small jurisdiction and, in the global context, our emissions are a drop in the ocean. But through our leadership we aim to not only cut our emissions, but to fuel hope – that broader systems change is possible and to encourage others to take action. It is working: the Victorian government is adopting the reverse auction process that we used to secure our 100% renewable electricity supply, and other cities and states are learning from our transition to zero emissions vehicles.

With Greens in government we will continue leading, taking on new challenges and driving further ambition. This year we are becoming the first Australian jurisdiction to introduce a social cost of carbon – a measure of the damages caused by emissions – to help ensure the longer-term impacts of climate change are considered in our government’s operations and decision making. We are also preparing a proposal to take to the national Energy Minister Meeting that an emissions reduction objective be included in the national electricity law, in recognition of the need to urgently decarbonise our electricity sector.

The ACT’s story is not just about government action, it’s about a community’s hope that has empowered us to act. Let your hope fuel your action, shape your government, demand better of corporations and keep driving the system change that is happening, everywhere you look. The strong support for climate action around the world gives me tremendous hope for the future.