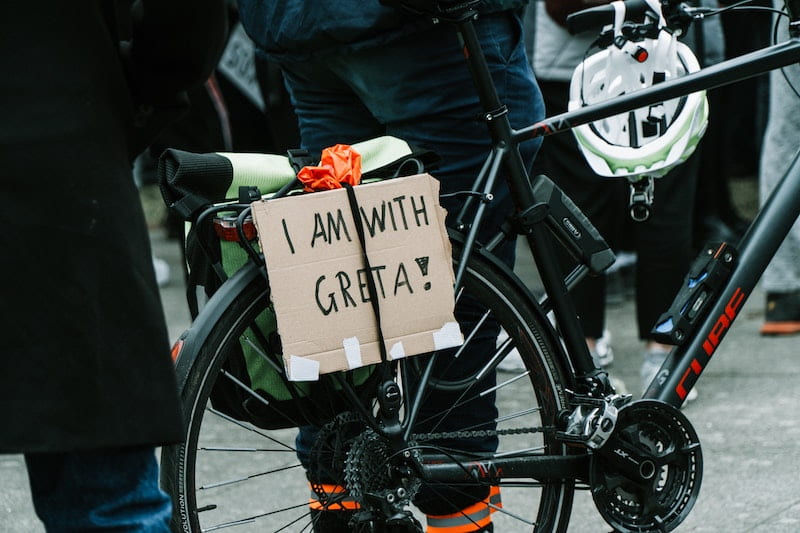 In 1896 Swedish scientist Svante Arrhenius first predicted that changes in atmospheric carbon dioxide levels could alter the surface temperature of the earth through the greenhouse effect in a seminal paper. 125 years later this alarming prediction has become a reality and activists worldwide have been fighting for real climate action. School Strike 4 Climate (SS4C), is a climate group formed in 2018 shortly following Greta Thunberg’s school strike for climate outside of the Swedish Parliament. The organisation had its first climate strike in November 2018 in multiple locations across Australia, and has been growing ever since!

School Strike 4 Climate and Fridays For Future have inspired some of the world’s biggest climate protests, with millions attending globally. While the world-altering presence of a pandemic has prevented many in-person actions in the last two years, mass global concern among school students about the rapidly changing climate remains constant.

SS4C is a national organisation that is a part of an international movement of school students demanding climate action. SS4C is fighting for no new coal, oil, and gas projects, including the Adani mine, and a hundred percent renewable energy generation and exports by 2030, and funding for a just transition and job creation for all fossil-fuel workers and communities. SS4C is run and led by Australian school students who volunteer their time to coordinate actions nationally and organise strikes in their local cities and towns. We are the next generation and we’re making our voices heard in the fight to save our future.

We are two school students in year 12 living on Ngunnawal country in the ACT who are volunteering with SS4C to demand our government to take immediate and sufficient climate action. We joined School Strike 4 Climate for reasons that hundreds of thousands of school students around the world protest annually. We are both seventeen years old and have felt the retributions of climate change in the form of worsening bushfires, extreme weather conditions, and increasing global temperatures. Climate anxiety and the lack of action from global leaders have made our future feel scary and uncertain. A common experience shared by most strikers is that SS4C allowed them to channel their climate anxiety into organising protests and events to make their voices heard by adults. This is no different for us. As school kids, we often feel like our voices go unheard, while the government makes decisions that will affect our future without taking into account our opinions. Participating in the climate activist space has been an extremely rewarding experience, allowing us to amplify the voices of young people about the climate crisis.

With all the terrifying climate-related headlines in the news in Australia and the world right now, things often feel hopeless and downright scary. However, for our sanity, it’s important not to overlook the recent successes we’ve had and celebrate our wins. As Canberrans ourselves, it was incredibly exciting that Canberra was named as the world’s most sustainable city by UK comparison company Uswitch. Canberra was ranked so highly because of its high use of renewable energy, such as wind and solar farms, and its open green spaces. The ACT government also aims to have net-zero carbon emissions by 2045. Canberra was not the only Australian city to be named in the report, with Brisbane being named as the third most sustainable city in the world. Australian cities keeping sustainability at the forefront of their ideals is a very exciting development. Australia is one of the most windy and sunny places with plenty of open spaces, perfect for creating renewable energy. It’s very hopeful to see Australian cities take advantage of this.

As well as state government sustainability advancements, local sustainability and climate activist groups have been paving the way all over Australia. As soon-to-be-graduating members of School Strike 4 Climate, we’ve had incredible opportunities to organise protests and actions, discuss climate-related issues with government representatives, speak to and be interviewed by the media, and do all sorts of crazy, amazing things we never dreamed we would be doing in our teen years. Joining SS4C was daunting to begin with. Everybody was so passionate and driven and seemed to know exactly what they were doing, while we had never sent a formal email before. Organising protests enabled us to grow, not only as activists, but as people, discovering life-long skills, passions, and friendships.

Attending your first protest is an unforgettable experience. The energy in the crowd, the clever signs, and inspiring speeches. But organising your first protest just might top that experience. As young people, we often feel unheard and unconsidered in political spaces. We are told we are too young to have opinions and to sit down and go back to school. SS4C has allowed young people a safe space to make their voices heard. Hundreds of thousands of students have taken to the streets and politicians and everyday people alike are listening! The School Strike 4 Climate movement has been a catalyst for important conversations across the world and has attracted the attention of politicians and global leaders.

The momentum of the climate movement has been vitally important in the increased interest in climate action shown by leaders worldwide. As Strikers, we have been incredibly lucky to be surrounded by local climate activists and groups to look up to. Big groups like Stop Adani and Extinction Rebellion (XR) have always gone out of their way to support us and make us feel welcomed in the activist space. Other student and university groups like the Australian Youth Climate Coalition (AYCC), the Environment Collective (EU), and the Seed Indigenous Youth Climate Network (SEED), have also been immensely helpful and we’re always excited to collaborate with them. Local community groups like Trash Gather, the Conservation Council, and the Environment Collective have also been incredibly supportive in our endeavors. And it’s not only climate activists, but the everyday Australians who have volunteered and donated their time and money to support us. Watching the community come together, climate activists, students, and supporters alike, has been one of the most rewarding parts of being a part of the School Strike 4 Climate.

This community is the driver for our actions and our personal motivation. Seeing people not only in our local communities but across the world supporting us and joining us is an overwhelming but deeply gratifying feeling. It is hope, it is proof that we are making a positive impact and that we can create and influence necessary change. The climate crisis can be such an overwhelming issue, and it’s easy to let that anxiety become all-consuming. But finding this support in any direction we look is immensely reassuring and makes this fight feel a lot less lonely and insurmountable. Working within this community helps channel climate anxiety into climate action, and creates excitement as we continue to grow and plan our next moves going forward.

Volunteering with SS4C often involves planning and preparing for strikes as they’re an amazing way to get community involvement and media attention. A strike organised by a very small number of people can and has brought thousands of people to attend! By creating these events, we provide a way for other young people to raise their voices for what they believe, in a society where there are not many opportunities for them to do so. This exact energy is tangibly electric at strikes. You see it in the way people march through the streets with purpose, holding handmade signs proudly above their heads, chanting in unity with all the other strikers. It’s a visible display of community, power, and hope.

Even when the whole world had to rearrange itself through the pandemic, we persisted. In the ACT we’ve had two lockdowns where we couldn’t hold in-person events, but we adapted and found ways for school students to keep getting involved online; hosting online rallies and panels and engaging with our community on social media. It was certainly difficult to change so much about how we run, but our support has been continuous and allowed us to keep hosting events.

Both of us will be graduating school in a couple of months. This is a somewhat terrifying reality that seems to have snuck up on us all too quickly. While we are excited for life after year 12, it does mean that we will no longer be school students and therefore school strikers anymore. Being a part of School Strike 4 Climate will be something that we will certainly be sad to say goodbye to. While we fully intend to stay on as mentors in the Striker community and go on to join other climate groups, we’ll miss being officially part of the group. However, we are very excited to pass the torch onto continuing and new strikers, who we know will make us extremely proud in the future as they continue to fight as school strikers for climate action.

Going forward we are excited to see how sustainability initiatives and new positive action emerges from the community and world leaders alike. While we still have a long way to go to get where we need to be, the fight for climate action has united communities to work together in order to create positive change. We are excited to see some governments and world leaders taking the climate crisis seriously and hope that the Australian government follows in their footsteps very, very soon. If not then many of us strikers will see them at the voting booths next year. Watching school students ensure their voices and demands are heard has given us hope for the future. Their persistence and maturity in handling difficult topics like climate change shows their capability to become future leaders and drivers of positive change, and inspires us all to continue fighting. It’s incredible to see so many people, school strikers, and community members alike fighting for climate action.

As we move onto the next chapter in our lives, we want to thank our community for supporting us and our fellow School Strikers. The experiences we have been part of in the past couple of years have been life altering. The fight for climate justice is for the highest stakes possible, it is worth the lives of every living creature. If we as a global community do not do everything we can to combat climate change it will cost us everything. But this young generation of school strikers, climate activists, and change makers have already proved they are more than willing to step up to the challenge that former generations and politicians have ignored. As a global community we already have the solutions, support and technology in order to resolve the climate crisis. We won’t back down until action is taken to use them.