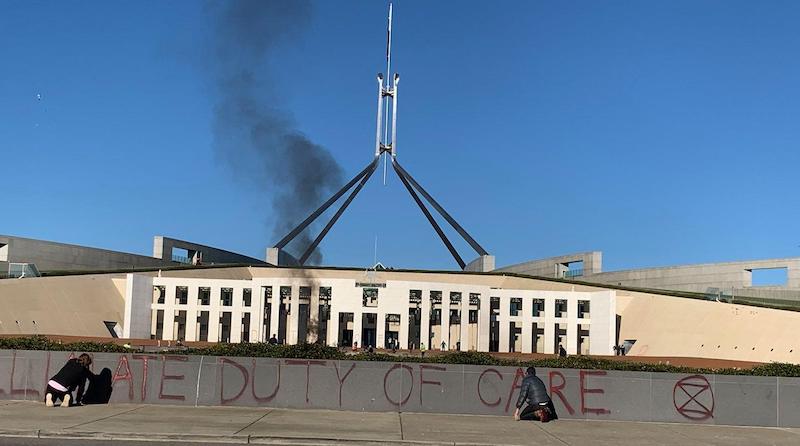 You can’t do it that way!

When Extinction Rebellion protesters spray-painted “duty of care” across the front of Parliament House the morning after the latest IPCC Report was released, drawing national and international attention to the fact that the Minister for the Environment is appealing a court decision finding she actually has a legal duty of care to future generations to protect them from the climate crisis, the Prime Minister’s response was predictable.

This kind of protest was not “the Australian way”, he said. He called it “foolish” and, weirdly, “selfish”. Ministers lined up to condemn the “vandalism”.

It’s a well-worn tactic used by those in power to neutralise protest: respond to the act, not the message. It’s about drawing focus away from the issue, of course. But, more importantly, it’s about undermining the very idea and practice of dissent.

Tacit consent is central to how power is maintained. Dissent challenges power, because it threatens to withdraw that consent unless certain demands are met.

As the Italian Marxist philosopher, Antonio Gramsci, wrote a century ago, power in modern societies is held through an interplay between institutions and culture. Institutions like parliaments and policing, corporations and courts, structure and mediate the way we live our lives, while cultural ideas create a shared common sense of how the world is. They coevolve to create the dominating power he describes as hegemony.

Actual coercion only needs to be used at the margins if most people can be convinced to consent to how things are through cultural norms. Policing evolves with the norm of obedience to authority; coercive labour with the Protestant work ethic; state power with nationalism; corporate power with brand loyalty; permanent extractive economic growth with disconnection from nature; the inevitability of domination with white supremacy, economic class, and ‘traditional’ gender roles.

Hegemony in this way can be seen as a confidence trick, dependent on people’s faith in its permanence. If those who hold the reins of institutional power begin to lose control of the world-shaping narratives, if the people stop believing the common-sense and obeying the norms, forcing those in power to resort to more blatant coercion, the whole aedifice can come tumbling down.

By policing the way we can dissent, powerholders conveniently enforce consent with the status quo.

To illustrate the extent to which dissent is policed, here’s a little list I put together a couple of years ago, when the school strikes and Extinction Rebellion burst onto the scene, ruffling a lot of feathers. These are all things I’ve been told, or witnesses others being told, over the years.

Goodness me, no. School is important, to give you an education that will prepare you for a lifetime as a consumer/worker/drone. School children should be seen and not heard. Actually, ideally not seen, either.

It’s totally fine for governments and corporations to disrupt traffic when building more pointless freeways. And, of course it’s fine when visiting heads of state block everything off for their cavalcades and security. But protesters seeking change should avoid ever making anything inconvenient for anyone under any circumstances.

Regulation is just bad, you know? Red tape! Shocking. We can’t have any regulations which stipulate a reduction in emissions. It’s fine if we regulate to make the transition to renewable energy slower and more expensive, of course. And regulating to stop protesters is just common sense. But regulating to reduce emissions? Communism! Soviet lunacy!

Oh, you think the alternative to regulation is to use the market? Too bad, pricing carbon is out. You can’t do that.

5. You can’t seek to change behaviour

Regulation is out and markets are out. But don’t even think about social engineering projects which try to encourage people to change their behaviour! How dare you? What do you think this is, the Cultural Revolution? We’ll ridicule you for being a wuss who carries a reusable bag, but we’ll also tell you to stick to using your reusable bags and stop seeking systemic change, because that’s just crazy stuff. And if you’re asking for big change and dare to ever use a plastic bag? Hoooo boy, we’ll have a field day!

6. You can’t lock on to anything

Are you kidding? That’s terrorism. Don’t even think about it. We’ll arrest you for carrying a bicycle D-lock. And if you stop a coal train for half a day, we’ll fine you more for a single offence than we fine the coal corporations for releasing toxic sludge that kills wetlands.

This “negative globalism” where countries seek to cooperate for a common cause and get in the way of corporate interests is a real problem. And don’t get me started on the terrifying spectre of “One World Government”, “Agenda 21”, and the Illuminati!

8. You can’t ask Australia to act before anyone else, and we don’t matter anyway

I know we said you can’t act globally, but I mean really you can’t expect little old Australia to do anything unless the whole world is acting. We only produce 1.3% of global emissions, and yeah, our population is just 0.3% of the world’s population, but we’ve always punched above our weight!

Markets are for the corporations! Corporations are allowed to influence consumer choice by advertising everywhere all the time, but the very idea of people seeking change trying to twist the profit motive by adding a layer of social or environmental concern is just shocking. How very dare you!

10. You can’t run for parliament

The bloody Greens are spoilers! Leave politics to the grown-ups who’ve very professionally failed to act for generations!

11. You can’t run campaigns which seek a political goal

Oh, you want to influence the major parties to shift their policies by running political campaigns? No way! The only acceptable role for civil society is to provide the outsourced services government no longer wants to take responsibility for. You can run job services and care services. You can do tree planting and bush regeneration. You can apply the bandaids when the system creates gaping wounds. But don’t even think about advocating for change to deal with the underlying causes.

12. You can’t use the courts to force change

Lawfare!? Listen here, governments make the rules, for the benefit of the corporations, and the courts are there to keep that cosy relationship nice and water-tight. If you start to use the courts to insist on basic rights, we’ll change the law to make it impossible. And judges who make decisions in your favour will find themselves on the receiving end of our wrath.

This intellectual elite business of claiming expertise is ridiculous. My opinion is as valid as some Nobel Prize-winning research.

These things take time, you know. And you only started warning us about this 40 years ago!

17. You never talk about jobs!

18. You only talk about the wrong jobs!

20. Professionals with real jobs shouldn’t be protesting; they should get back to their actual jobs!

23. Look, see, they changed terms, they must be faking it!

I don’t know about you, but it doesn’t feel to me that this is about how we’re campaigning. I reckon, just maybe, it’s that these folks don’t actually want any change.

And, by policing the way we dissent, they’re cementing the idea that we should all simply consent to the way we’re ruled.