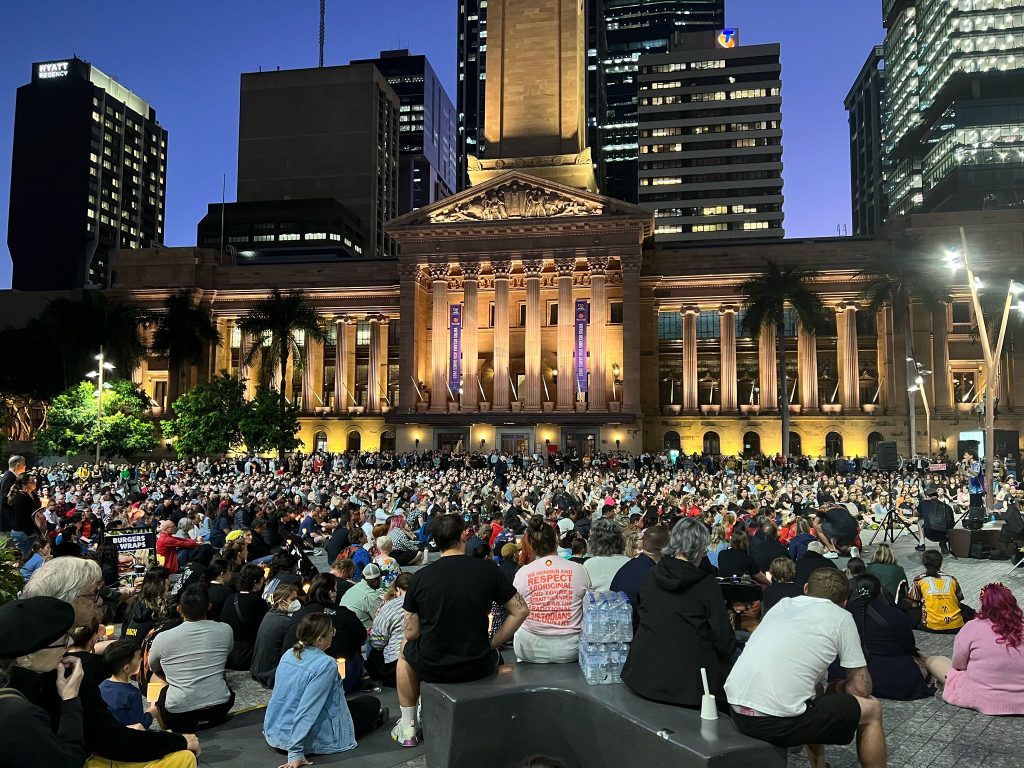 It’s no accident that so many Brisbanites think local government is mostly just about fixing potholes and building playgrounds.

Power-holders find it convenient to perpetuate the narrative that councils are merely local service providers with limited political relevance, because it helps justify anti-democratic moves to take more power away from local communities, while reducing public scrutiny of the many big, significant decisions that local governments do make.

But if we want to transform our world for the better, we need to grapple more directly with the role local government plays in society, and remind ourselves that deep, lasting, positive change comes from the bottom up.

Many of us forget (or don’t realise) that Brisbane City Council controls an annual budget of over $3 billion, spending hundreds of millions per year on wasteful road-widening projects that would probably attract a lot more critique and public debate if undertaken by higher levels of government. Those public funds could instead be spent on more public housing, public and active transport improvements, environmental restoration or even renewable energy generation.

Even more significantly, councils like BCC have control over land zoning, allowing them to rezone rural farmland for suburban sprawl residential subdivisions, or to rezone industrial areas full of warehouses and workshops into high-density precincts with 30-storey apartment towers.

These kinds of changes to city plan overlays and land use zonings can increase a block of land’s value by millions or even tens of millions of dollars (fertile ground for corruption). Whoever happens to own the land at the time it’s rezoned reaps a massive windfall in rising land values, but the general public doesn’t get a fair share (even though the increase in population density will likely also require millions of dollars in additional public infrastructure investment). In this way, Brisbane City Council effectively creates and distributes billions of dollars’ worth of private real estate value that’s overwhelmingly concentrated in the hands of an elite few.

But even beyond the money itself, BCC is one of the most important hidden fulcrums of political power and social consensus anywhere in Australia.

Queensland’s cultural and socio-political currents exert major pressure on the Australian political landscape, and Brisbane shapes those Queensland currents in a big way. Being the state capital, most government departments, industry lobby groups, big businesses, banks, cultural institutions and media outlets are headquartered here, as are the individuals who run those organisations. The values that are normalised within Brisbane’s collective consciousness can quickly become the dominant values among the leadership of all those major statewide and nationwide institutions.

At the heart of this hub of junctures and tensions, Brisbane City Council is one of the least obvious but most significant shapers of culture and political possibility.

When trying to understand a council’s political significance, people often focus too much on the hard, physical stuff that councils build – the road upgrades, the bridges, the playgrounds, the sports facilities. But it’s the council’s ability to shift narratives and steer public discourse that we should pay most attention to.

In recent decades, the Liberal National Party have exploited this reality better than the Labor party (perhaps without even fully understanding it). Not only have they used the city council as a training ground for career politicians and a foundation for seizing power at higher levels (see e.g. Campbell Newman), but as a cultural power centre for manipulating how the city sees itself and what kinds of futures its residents aspire to.

Even local governments far smaller than BCC can shape a community’s priorities and norms through funding and support for certain kinds of cultural events, rituals and institutions, and by elevating and celebrating some ideas and issues while marginalising others.

But Brisbane City Council commands so much funding, so many policy levers and such large communication reach that it sets the direction for the entire South-East Queensland region. Brisbane’s mayor wields far more influence than a dozen backbench state or federal parliamentarians.

Cities shape every aspect of our lives. Seemingly mundane decisions about urban planning rules, transport network investment, small business regulation and public space management end up dictating how we move around, who we interact with, what kinds of spaces we live and work in, what we do for leisure, and how our society adapts to major challenges like global warming or a virus outbreak.

As local councillor, Jonno uses ward office resources to support anti-racism events such as the above. Photo credit: Stephen Bates.

We are shaped by our urban environments, but most of us have comparatively little power to shape that environment in turn. We don’t usually have a meaningful say in urban planning or transport policy decisions, and we certainly don’t get a say in whether council funds are used to plant more trees or to spread more bitumen.

So many of the problems our society is grappling with – from social isolation to rising transport costs to fossil fuel energy dependence – come down to local council decisions and priorities.

Whether we’re talking about climate action, housing justice, or creating a different, better, more democratic form of collective governance, local councils have a critical role to play. But most of us don’t even know the names of our local councillors, and certainly wouldn’t consider putting our hand up to serve on the city council.

Right now, we’re living through a period of great change and potential. Many of us are trying to work out how best to direct our energy, and where the viable openings are to help create a better world. Where are the pressure points and fulcrums that can enable a positive, radical, cultural transformation while applying upward pressure on state and federal governments?

Perhaps seizing greater influence over the workings of local entities like Brisbane City Council is a crucial puzzle piece that too many of us have been overlooking.

This article was adapted from a longer piece that was originally written with a specific focus on Brisbane City Council. You can find that piece through this link.