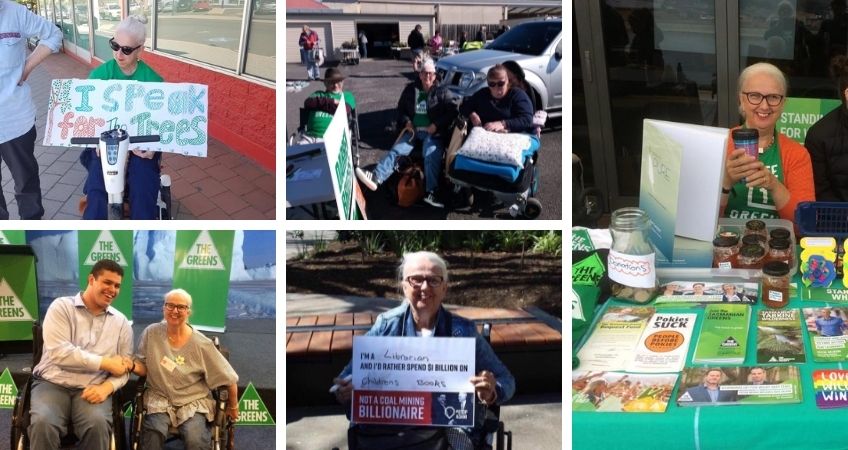 When posing the question what mechanism does dissent play in Australian politics we can view this through the lens of history. Australia has a long history of formulating policy through grassroots actions; the shearers strike of 1891, the Pilbara strike of 1949 and the waterside workers strike of 1998 are each seminal points in history that have remade the conditions of workers in Australia today.

I pose the question now: how do those who are unable to mobilise show their voices and dissent to structures and agencies that are prone to try and control them? I am speaking about People with Disabilities (PWD). How do people with disabilities use their collective power to oppose legislation that is detrimental to their well being?

People with disabilities have always been active in the space of dissent, staging road blocks, sit-ins and generally being as civilly disobedient as the next group. However, the cost is high. The emotional labour comes at a cost to those who speak up and burn out is a real issue in this space. PWD get tired telling the same, often very personal stories, over and over again, reliving trauma in an attempt to enlighten those who have power to change our circumstances. Leadership is needed, allies are needed and a movement of understanding from the general public is needed. Considerations for the emotional labor placed on the shoulders of those that have the most to lose is phenomenal and not understood by the general population. When your life depends on your activism kicking goals, that’s when it’s real.

Leadership has burst on the scene from time to time from the disability community and grown the movement of rights for PWD, but our struggles and history are largely not known by the wider community. Over the years strong individuals living with disability have secured the rights and advances made in our living conditions through sheer bravery, determination and emotional labour. The names include Stella Young, Alistair McEvan, Sue Salthouse, Louise Savage, and the new guard of Senator Jordon Steele-John, Dylan Allcot, Carly Findlay and Sam O’Connor. None of these are household names, but nevertheless with countless other unnamed disability champions they have furthered the cause. They’ve raised our profile as people and validated our right to equity in our society.

People with disabilities number 43.7% of all complaints made to the Australian Human Rights Commission. Complaints of neglect and abuse are so high a royal commission was triggered in 2020 to investigate the very real cases of abuse and neglect perpetrated on PWD. Recently in a discussion at a national meeting of diversity groups folks were surprised that their group wasn’t discriminated against at the same rates as people with disabilities. If you wear your diversity in your physical body like people with disabilities do, discrimination happens to you almost every time you leave your house – in shops, venues, transport, education and medical care. The life expectancy of people with disabilities is much lower than the general population, which can partly be attributed to the care/discrimination we receive when seeking medical attention. PWD are often viewed as unreliable when speaking about their own health and because of that there are cases of people dying because medical treatment was not given in a timely manner. In one such case a friend of mine’s daughter died of a heart attack in care after complaining for days of pain. She died in the bath in her care facility.

How do we show dissent when the doctor or medical profession won’t listen to us? They simply can’t look past the disability to treat the person rather than the stereotype. The immense courage and strength it took for people living in institutions to become emancipated, let out of their prisons and live in the community alongside their contemporaries can not be fully imagined by people not living with the threat of being locked away for the whole of your life in an institution.

That’s right! In the not too distant past of Australia people with disabilities had to fight and engage lawyers to escape imprisonment in institutions. Annie McDonald was a pioneer in this space and successfully petitioned the Supreme Court of Victoria in 1979 to leave the Crowley Hospital in which she had lived since the age of 3 years old. To do this she had to challenge the status quo of belief around people with disability and prove that she had the ability to manage her own affairs. She and many others were indeed prisoners because of their disability.

People with disability number one in six in Australia today, which will increase as our population ages. There is therefore intersectionality for PWD with other groups; LGBTIQA+ PWD, PWD of colour, PWD for climate action. We populate these other dimensions and bring with us the picture of abject subjugation. When we tell our stories in these groups the power to motivate change is phenomenal.

“You thought it was hard coming out, imaging being a crip in a chair coming out.”

“Imagine being a crip in a chair and trying to find themselves and acceptance in a world full of discrimination.”

People with disabilities take the struggles of diversity to the next level when you add the intersectionality of race, colour, sexuality, and gender diversity. We are disabled and gay, we are disabled and black, we are disabled and indigenous, we are disabled and from diverse cultural backgrounds. The intersectionality of us colours the spectrum of diversity and the layering increases the burden of discrimination felt by individuals even within your subgroup. Discrimination is felt by people with disabilities by the very communities that should be embracing them, knowing full well what it’s like to be discriminated against. The feeling of being shunned for being disabled brings another layer of shame. PWD raise above this and find their own place and show dissent by just being, for just continuing to inhabit space and making a new space for themselves.

And yet we do it with such bravery and we show our dissent about the mainstream discrimination of us by pushing the boundaries out to include us. Human rights are every one’s rights. We front up at marches, taking our place and right to be there. We show our dissent by showing up!

When it comes to climate change people with disabilities will be impacted the most and yet are the least able to prevent these impacts. People with disabilities on average have the greatest level of poverty, which results in all the issues associated with poverty; poor health care, housing, education, and life expectancy. Climate events such as heat waves and extreme cold see people with disability being very vulnerable. If you don’t have adequate air conditioning then you freeze in winter and suffer heat stroke in summer. When it comes to the climate movement however we are not represented enough. We will die, where’s the emotive outcry? We need to show up and show our dissent of the status quo and inhabit the spaces that our lives depend on.

When it comes to the mainstream and then the fringes, people with disabilities need to be pushing our wheelchair into the front row because continually being in the back means that no one can ever see us.

My own personal story bears witness to this. I have spent most of my life looking  disabled, I just can’t hide it. Yet I have tried to be invisible and fit in, to blend with the pack. But that’s never going to happen. Someone once said having a physical disability is like being famous. Everyone is looking at you but not for the right reasons. So fitting in doesn’t work, what does work is being allowed in!

Opening a space for us, giving us room.

I have shown my dissent of the status quo by walking through life like a person throwing Molotov cocktails over their shoulder! I experience discrimination and then I just blow it up. I call it out. This comes at a huge personal cost. It’s hard to change the world or even your own small state when you get a reputation of being ‘that whinging woman’, but when there is so much work to do I guess I’ll just take it.

One example of how much work we have to do happened recently at a launch in a green group I’m involved in. I’m not unknown in our group and my disability is not unknown but when I arrived at the venue there was no wheelchair accessible toilet for me. So what did I do, how did I show my dissent? I didn’t drink anything so that I could still be involved and I wet myself on the way home. I fumed on this situation for a few days and then I rang a member of our branch and spoke about what I experienced. I then put in a submission to give a workshop at the state conference to educate the broader group around issues of inclusion. I spoke to the state convenor and a policy was ratified that all venues were to be accessible when holding events and then a message was sent to all branches. The process was arduous and the onerousness was on me to do all the work to make sure that in the future it would not happen again.

I’m not a victim here, I showed my dissent, I showed up, I represented and I called it out and I’m telling the story! I’m not passive aggressive, I’m not a troublemaker, I am not sure what I could have done differently but I am certain that as a group my needs and the needs of PWD could have been met and this situation averted and never occurred in the first place.

I’m a person, one of many that wants to show up and have our human rights and our civil rights upheld. If that means taking on a venue or talking about the choices a group makes it is worth it if it changes things for the next person who shows up!

Dissent is used by people with disabilities to secure quality of life, freedom and our basic human rights, not just for individuals but for everyone. Nothing about us without us! So next time there’s a protest or a rally, offer the mic to a person with a disability because our dissent is as valuable too.

Appreciate the read? Be sure to CHIP IN, even as little as $5, to help fund future articles.