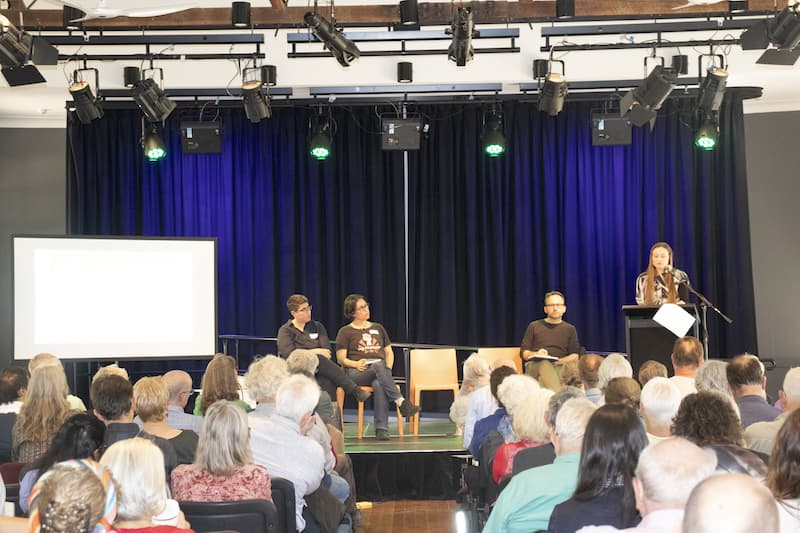 Elise Klein provided a keynote address at the Green Institute conference, Reclaiming Democracy, in 2019. In this talk she discusses the need to think beyond waged labour, seeing it as an institution that is not democratic and never will be.

So perhaps I can start by saying that whilst the are important efforts to make current employment conditions better, we need to go further and recognise that the institution of waged labour is not democratic and never will be. I say this, at a time where some parts of the left are bunkering down to protect waged labour as a central institution of settler society.

I think we need to rethink this – especially if we want a truly decolonial, anti-patriarchy, ecologically abundant pluriverse, we need to redefine what we mean by productivity to include all forms of work.

I am going to outline why this is the case, and briefly suggest a few areas that may be useful for moving forward. But can I just make it clear, I think efforts to improve what we have got are important, but this should not cancel out efforts to transition to post-work.

The problem with employment

So we know already that there are some serious issues with the idea of waged labour. Kathi Weeks has outlined these issues at length already stating that:

But I want to add a few other structural issues as to why we need to rethink waged labour.

We have a global economy which is more like a global factory in that the formal economy relies on the informal economy – this is where the majority of the world works without labour protection and without economic security, living just making ends meet.

In thinking about how the formal economy relies on the informal economy, think about global supply chains of consumables – the head office of Hanes (makers of Bonds, Berli and Dunlop) may comply with worker’s rights here in Australia, but their whole business model is based on exploitative informal labour in Bangladesh.

Thinking globally about the world of labour, it’s like the colonial plantations never ended where informal workers are consumed to produce for the global market, but hardly can reproduce themselves because of the poor pay and conditions they get renumerated with.

2.) Second, and thinking about Australia specifically, the institution of employment is a settler colonial institution and has and is being used to legitimise attempts of elimination. Lots to say here but there is a long genealogy of the ways in the “good First Nations person as a worker in settler society” has been a marker as to which people have been made to live and die.

The point here is that there is an assumption that people are unproductive but there is heaps of research showing that people undertake all sorts of work across the Kimberley including care of country – which has a different ontological basis that settler work, and also care of children, care of the elderly and care of community – all of this is unpaid work. In the 2016 census First Nations people in the East Kimberley undertook more unpaid child care work than the settlers – showing they are way more productive in this highly valuable form of work.  Yet in policy and in some part so the settler public, they are passed off as unproductive and lazy etc.

I think also worth noting is how the settler economy is based on the work First Nations people have done in looking after the country since time immoral. The stolen land underpinning the economy is productive because it has been looked after. The settlers of Melbourne couldn’t believe their luck at the pastoral lands they found – because of the careful work First Nations had done. Similar can be said about the North of Australia and the White Paper to develop it. They see it as an untapped future for Australian development – but it’s all because of First Nations care.

3.) Third. Since Federation, employment has always been used to define people as deserving or undeserving. It has been a key metric used to construct borders between bodies and create social hierarchies. People not working or unable to work – often because of poor functioning labour markets, are subject to social exclusion. A person’s role in the formal labour market has been a key instrument in defining who matters and who doesn’t – often with racialised, gender and ableist implications – from eugenics to now welfare conditionality.

For example, waged labour has been a driver of ableism where non abled bodies are defined by their ability to be productive for the labour market.

4.) Four, and on gender. The institution of waged labour has long silenced the reproductive and affective labour that capitalism relies on, which is mostly carried out by women. It isn’t enough to integrate women into getting formal jobs as we still do most of the unpaid care work that still sits outside conceptions of economy. We need to go further and see how this unpaid care labour is a fundamental aspect of formal labour. There is no formal labour if our mothers didn’t grow us, feed us, raise us, care for us.

This has long been an argument by feminists – the wages for housework campaign in the 70s argued that housework should be renumerated as it enables capitalism to take place. As Silva Federici says we do the “cooking, smiling and fucking” that capitalism requires to function. All unpaid. The idea of this campaign was not to stop at getting a wage for housework. Rather, when this work gets seen and renumerated, the next task was always to overthrow capitalism and the whole waged work relationship.

This remains a struggle today – unpaid care work continues to underpin capitalism. PWC just found that unpaid childcare is the biggest industry in Australia. It is around 3 times bigger than the financial industries sector, construction, manufacturing and mining (Australia’s four biggest formal industries). If we combine all other unpaid work listed in the Census such as volunteering, looking after the elderly, domestic work is together, they are also bigger than these other formal sectors. But this unpaid care work is often overlooked and increasingly outsourced, often to women in the global south, who are paid poorly for this once unpaid care work of the now the middle class in the Global North.

My point here is that capitalism and its centrality of waged labour, cannot structurally resolve these issues because it’s part of the problem. Efforts around improving waged labour can help while we are transitioning, but from my perspective, we need to get bold and creative if we really want to democratise work.

One part of the direction we can move towards delinking economic security from employment.

Something that a Universal Basic Income as a rightful share in wealth generated may be able to do. I say rightful share and not other names such as citizen’s dividend, because rightful makes us ask what is rightful – does everyone in this settler colonial society get the same amount when we live on stolen land? There is possibility here, to build in reparations as part of what is rightful such as proposed by Black lives Matter in the US – everyone gets a UBI, but people of colour get more as one small form of reparations for the years of slavery and jim crow.

But a UBI is never enough alone and must be accompanied with a shift in how we think about productivity to avoid exacerbating social hierarchies and gender divisions of waged and unpaid work.

I have hinted at some of the ways already people are very productive – care work, care of country, but also artistry, protest, the list goes on… My point is that there is so much work we all do, but we are confined by conceptions of productivity driven by norms underpinning waged labour and capitalism.

Something like care – defined way beyond the domestic realm, provides some really important ways in which to help in this reconfiguration of productivity. Care shows us very real practices that emancipate which are already underway, and it’s all around us as the concrete work of affect and maintenance, and as a vital politics in interdependent worlds. In caring for, with, and about others (human and non-human), in taking responsibility for our political and economic compliancy, and in caring enough to listen, and act.

There is a real possibility to emphasize the potential of care to disrupt the status quo and to unhinge processes underway leading to what Tony Fry calls our ‘defuturing’ – the unravelling of life from ecological and economic crises.

There is of course much more to say here, but I will stop here and we can discuss all this together.