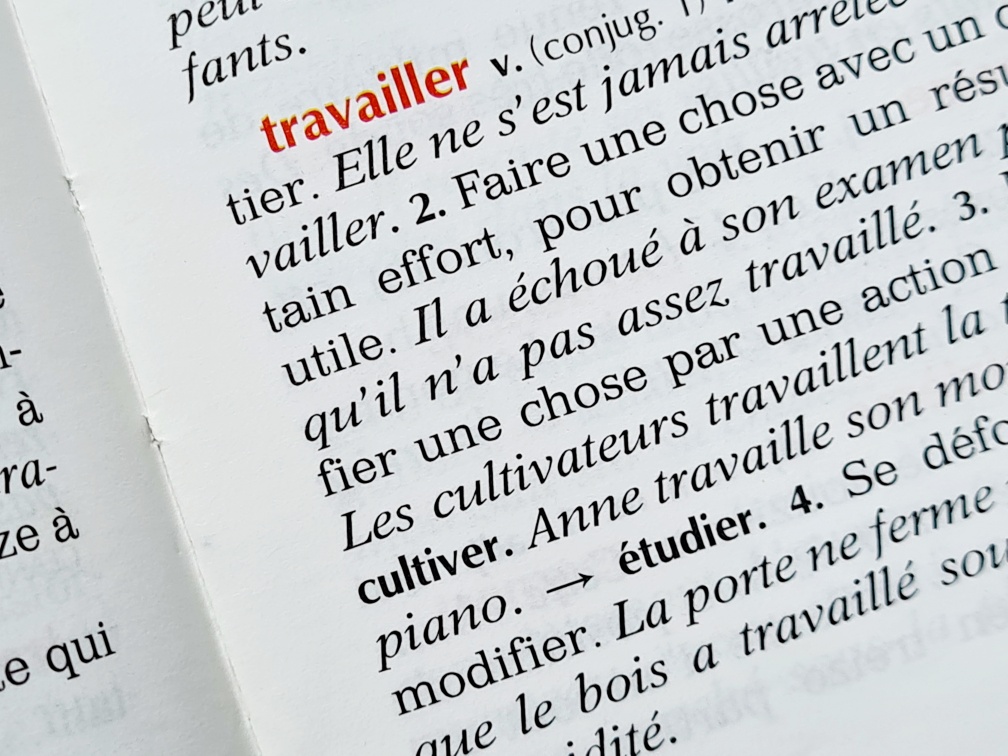 In a dark room, Danton, played by Depardieu, stands trial before the Revolutionary Tribunal, accused of being an enemy of the Republic. He speaks many languages: of cinema, with its close-ups and jump cuts, its capacity to convey the hunger of rabble and the sweat of a condemned brow; of revolution, People of France – the tribunal is you; of his newly-forged nation, the inciting français of the Committee of Safety and Robespierre, his once-friend and now-accuser.

Danton interrupts the trial to address his public – rogue-eyed, he launches into a chest-thumping speech. It’s a call to freedom, equality, something greater than singular ambition at the cost of le peuple, my gaze flicking between his gesticulating hands and the white subtitles at the bottom of the screen. I know I’m missing something – too much – and in that moment, in the light-guttered theatre of the Hobart State Cinema, I promise myself that I will learn these languages: artistic, revolutionary, Dantonian/Depardieun French. For the world is polyglot, Babelian, open to mistranslation. Multitudes die for wont of understanding.

This is the good work.

So defines our old Le Robert, its flapping spine held together with sticky tape; hauled out by me during various translation projects, or by my sons as they completed tasks for their foreign-language-by-correspondence course. On the frontispiece are scribbles, where a child got bored with his mother’s lingering over permutations of meaning when all he ever wanted was to run outside and play.

The word travail in English was once used for the labour of childbirth, borne through a reverse journey from Middle English → old French → Vulgar Latin → Late Latin, where it began as trepalium, an instrument of torture. Language transmits its burden of history, a Chinese whisper between time and space and tongues, till work becomes an apparatus of sufferance. But there are other ways. Other instruments and organs.

hardworking, masculine and feminine nouns. Person who takes their work to heart.

When I first meet my partner in the French part of Switzerland, neither of us speaks the other’s language. Before we get together, we will – he’ll learn on a study trip to England, me via travel and an old grammar book that belonged to his Dutch mother. One night, everything changes between us, as industrial rockers The Young Gods belt out their anthem, ‘L’Amourir’ (The Love Beat), and in every direction multilingual festival-goers writhe beneath a pulsing moon. Then the real work of translation begins.

There is the body and its movements, and the slipperiness of prepositions: dedans, sur, dessus, dessous, en bas, en haut – in, on, over, under, down, up. I mistake his gaffes for French experimentalism. Discover that this is the labour of love’s rendition in whichever dialect: tongue, hand, breath. We laugh; try things we might not have, in this Twister-version of language and desire; begin a decades-long apprenticeship in the art of loss and gain.

Years later, in a masters course I’m teaching on literary translation, when questioned by students about where I learned French, I’ll tell them: ‘in bed’. The group is bilingual and it’s an in-joke – it reminds us of what’s at stake. Hold a poem by Eluard in your hands and begin the work: of the lover, the wordsmith, forging in heat.

And I love you so much I no longer know,

Which of us is absent.

Or working out, what each act of translation brings, how it places us word by word in rapport, with others, with the multiplicity of ways the world is lived and signified, a single mind or a collective, this land and another, rendered in detail borne of need or anger or love. Which sentence will be the flint? Which will make way for bliss? Which will give ingress to a knowledge system that will mean no turning back? Which will allow the translator to make peace with the incommensurability of her craft, so this might bear its necessary fruit?

The first translation gig I’m ever paid for is commissioned by my employers at a language school in Lausanne. The director wants me to translate a test he’s written, to be used to determine the French or English proficiency of staff at a large multinational in Geneva. We spend a day at their international headquarters, assessing everyone from management to the bottom rung, the building a monstrosity of glass and steel, a corporate Tower of Babel where every form of human untranslatability is performed. Soon after we test the Genevans, my boss offers me an unusual commission: to have lunch regularly with a Russian client, who wants to learn English via conversation rather than a course. He’s a businessman and needs English for his work, about which he offers no details, even when pressed over several meetings (given the proliferation in Switzerland of the Bratva, the Russian version of the mafia, I deduce his work is unlikely to be of the humanitarian kind.)

At the next lunch, he gifts me a book on Russian history, its cover metallic and embossed with words I can’t decipher. As I flick through its pages with pictures of battles and monarchs – the story ending, according to the numbers I can read, at the dawn of the 1917 revolution – he leans closer, too close, and offers to translate. I decline. That afternoon, I tell my boss that I’m no longer available for lunchtime conversations with the Russian, and not long after I quit, certain of two things. Translation isn’t always good work. You can never be sure of the price.

Gayatri Spivak (1993): ‘In the act of wholesale translation into English there can be a betrayal of the democratic ideal into the law of the strongest.’

Texts are anglicised, colonised, deradicalised, subsumed into the capitalist project, used against their creators; but translation can be a process of reclaiming, of writing back to empire. A stuttering in the master discourse. A rupture. New spaces opened up or left ajar.

to work 4. Deform, modify. The door no longer closes because humidity deformed the wood.

I begin work on a new novel set mostly on Pitjantjatjara Country, and as part of my research I learn a little of the language from books and during visits to communities, but my progress is slow; so when I hear of a two-week summer intensive at the University of South Australia, I sign up. On the first day we’re divided into small groups, each with a tutor who’s come down from the APY Lands, the lessons as much about Culture and Country as Language, and often held outside in the intense Adelaide heat. The course convenor informs us a performance will be held on the final day, each student to prepare something in Pitjantjatjara to present.

I decide to write a poem, first in English, my syntax and rhythms clearly inflected with what we’ve been learning, including linguistic repetitions and incantations not normally part of my style. Then begins the careful translation into Pitjantjatjara, a process full of cultural lacunae; the unsettling of my place as settler; a constant teetering along the fine line between appropriation and deep listening. The finished poem, with my tutor’s permission, references the fallout of the nuclear testing at Maralinga on her community, and when I read it on the day, she’s visibly moved. The moment is fraught, the politics muddy, but there is without question a reaching across.

with your ear   with your heart

Inscribed in these words is movement – traducere, trans-ducere, to lead beyond or across – and displacement. Translation is a migratory practice, and not always one of choice. It requires listening with more than the ear; a willingness to lose yourself in the world of another; to fail, not prevail, over and over again. Meaning is not to be extracted – this is an economy of care. It’s the beginning of a relationship, not its end-game.

My son leans into the page. The book is on a wooden stand, like a holy text, held open to the calendar day. He attempts a translation, calling up the words he knows in his father’s French, checking in with me as he would when he was little and acquired his mother’s tongue. The title: Offrandes: 365 Pensées de Maîtres Bouddhistes. The quote is from the Dalai Lamai – so many permutations, from a thought in Tibetan, transcribed into English, this edition in French, and back again to English as my son stumbles on oeuvrer (another word for work), which he’s misread as ouvrir (to open), so many false friends. He comments on the universality of the idea set down here – I could speak to him about the dangers of homogenising human experience, but there’s a potency to the moment that says, hush now, other work is taking place. We parse the sentence together, do our best to avoid translatese.

Broadening your perspective assumes working in common with others.

I was his age when I first saw Danton, all those years ago. He’s bound for a new world, with smatterings of those languages I yearned for – of art, of revolution – and the work of translation before him. Work in common. Work of love. Of reaching across. Walking alongside. Never finished. Always about to begin.

Lia Hills is a poet, novelist and translator. Her latest novel, The Crying Place, was released with Allen and Unwin in 2017 to critical acclaim. Lia travelled regularly to research and write The Crying Place, set partly in Pitjantjatjara country. As part of the process, Lia stayed in Aboriginal communities and began learning the Pitjantjatjara language. The Crying Place was named Book of the Month by Australian Independent Booksellers and was longlisted for the Miles Franklin Literary Award 2018. In 2019, Lia received a Creative Victoria Creators Fund grant to work on her new novel. Set in the Wimmera, it is the story of a young girl who emerges mute from the desert, and the response to her emergence in the local community and beyond. The novel explores the erasure and re-emergence of voices, both human and non-human, and the Great Australian Silence. Lia lives with her family in the hills outside Melbourne, where she works full-time as a writer, often observed by birds.