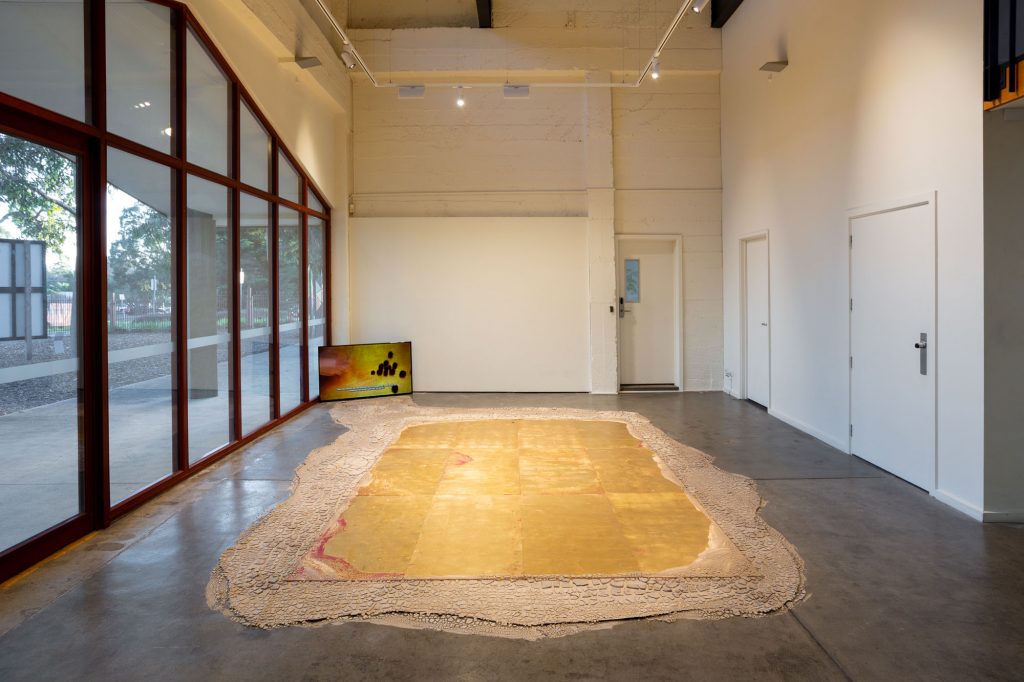 Azza Zein explores an ecological notion of work drawn from more-than-human approaches in the humanities and art practice. What if work were measured through its edges and the traces of its own doing? Work’s peripheries crawl around the skirting of walls, the filter of a dryer, among folded bedsheets, the sweat on a computer mouse, and the dirt piled up between keys on a keyboard.

The discussion around the end of work often centres on the notion of work in relation to technology. That is, work will end once technology takes over. However, the title of this issue, ‘the ends of work’, stands out in the plurality of the word ‘ends’.

What if work is a body and the ‘ends’ of work become its extremities, edges or peripheries? Does work have tentacles to move and shift? Is work an accretion of layers of some sort, and opaque layers somehow obscure its ends? Is work a singular body or matrix of connected networks? How would you describe work with all its moving tentacles: hesitant?

Work is uncertain for the precariat. Here the emphasis is that  work is undecided, doubtful, and irresolute. We operate as bodies within this more extensive set of bodies that have made work and its conditions extremely precarious.  We are confronted by the invisibility of who is the exploitative class and whom to fight to change such an environment as we operate inside our individualistic cells. The elusiveness of work conditions has made it more challenging for people to collude.

Work is also migrant, dissociated from land and place under this economic system. It can seemingly be done anywhere, at home, in another country. When corporations talk about outsourcing or redundancies, their understanding of work’s values is not linked to a human body or a place. Work is disembodied and displaced.

What is work and how to measure it? — become important economic (and artistic) questions. Mainstream economists will often consider the measurement of work in notions of productivity. Instead, what if work were measured through its edges, the traces of its own doing?

What if work were measured not through evaluating an input-output conversion but rather some material trail of rebellion? What if what we need is a form of stubborn materiality? [1]

Work’s peripheries crawl around the skirting of walls, the filter of a dryer, among folded bedsheets, the sweat on a computer mouse, and the dirt piled up between keys on a keyboard.

During the multiple lockdowns and within the walls of my apartment in Narrm, Melbourne, I realised how my body is at the intersection of three precarities: mothering (care), casual work at the university, and my being a migrant without a solid support network.

In my recent exhibition at Incinerator Gallery, Lock dispersal in Corner Solutions, I explored these three parallel precarious conditions of care, work and migration through the stubbornness of some materials in the archaeology of domestic space. The exhibition sought to locate artistic work as webbed within a system that subjugates humans and non-humans through displacements and disembodiment. For a non-commodified relation to work, we need non-commodified and rematerialised ways to measure and take account of work, particularly invisible work.

The material traces of invisible work are recalcitrant and rebellious: dust, hair and the dryer’s lint. They emanate from a body in movement. Stubbornly, hair disperses everywhere in domestic space, and the lint builds up inside the dryer’s machine.

How can artistic practice claim to be interested in rebelling against standardised notions of work without being didactic about it?

My artistic practice starts from the observation that human bodies and non-human bodies have been subjected to the same system of erasure through either standardisation or industrialisation. Here the body of the precarious worker, the extracted industrialised clay, hair or textile threads, have all been subjugated becoming instruments with precise functions and purposes.

The displacement of things from their natural space may be visible in industrial materials: timber displaced from trees, industrial forests, organic clay becoming industrialised, industrially grown shells, or a dryer’s lint as the by-product of a machine’s work. Through displacement, work and objects become desacralised [2]. Their instrumental purpose becomes clear and determined despite operating in uncertain conditions.

Our focusing on such an ecology of things and their “vibrant matter”, to use Jane Bennett’s words, is not meant to undermine the fact that there exists tension between precarious workers and those who aren’t. An ecological notion of work means that artists not only need to work with elements from nature as such but rather be in tune with the conditions surrounding things. By acknowledging these parallels of subjugation, we may learn from these rebellious materials, shifting the problem from a human-centred notion of work and class work to an ecological idea of the material agency at work [3].

1. “The idea of the thing itself is a way to capture the stubbornness of the materiality of things, which is also connected to their profusion, their resistance to strict measures of equivalence, and to strict distinctions between the maker and the made, the gift and the commodity, the work of art and the objects of everyday life.” Arjun Appadurai, “The Thing Itself”, Public Culture, 18:1, Duke University Press, 2006. p.21.

2. Here I am thinking of the term as used by Deborah Bird Rose, ‘desacralisation’ as a lacking and insensitivity to mystery: “One will always encounter mystery in a holistic system. Properly contextualized, mystery would be a cause for celebration as it would signal the integrity of larger systems. Conversely, total predictability would signal crisis—loss of connection, loss of the larger system, more prosaically, bad theory, and, in Levinas’s terms, desacralization.” See Deborah Bird Rose, “On history, trees, and ethical proximity”, Postcolonial Studies, 2008. 11:2, p.163.

3. Jennifer Cotter criticises new materialism stating that “In bypassing labor, moreover, new materialism bypasses the social relations of production in which the surplus labor of the producers (of tools, etc.) is exploited in the service of the private accumulation of wealth by owners.” See Jennifer Cotter, “New Materialism and the Labor Theory of Value.” Minnesota Review, vol. 87, 2016, p. 171-181. I disagree with Cotter’s criticism as it does not acknowledge a shift in the way capitalism operates today. Brian Massumi explains, for instance, that “Human capital was invented by neoliberal capitalism to replace the figure of the worker in an attempt to render obsolete the antagonism between worker and capitalist that structured the preceding industrial phase of capitalism.” In contrast to capitalist surplus value (absolute or relative), Massumi proposes “a processual surplus value… purely qualitative and concerns the intensity of lived potentials. It is the surplus value of life”. Brian, Massumi, 99 Theses on the Revaluation of Value : A Postcapitalist Manifesto. University of Minnesota Press, 2018. (Quotes from Loc. 474, T34 scholium c and loc. 234 T16, scholium E). In late capitalism, the social relations at stake are not anymore just workers vs capitalists, but bodies within bodies, human or non-human. In simple words, how can we fight capitalist extractivist modes of living? Jane Bennett acknowledges how material agency can be recognised. “It is my conviction that to really understand social practices, it is necessary to acknowledge the non-human components that are always at work inside them.” Jane Bennett, “Powers of the Hoard: Further Notes on Material Agency.” Animal, Vegetable, Mineral: Ethics and Objects, edited by Jeffrey Jerome Cohen, Punctum Books, 2012, pp. 237–70.

Azza Zein is an artist and writer who lives and works between Narrm/Melbourne and Beirut. Her research explores how artworks can comment on the dematerialisation of the economy and invisibility of labour. She draws on her experience as a migrant, her Arab heritage and her background in economics to explore artistic processes that can be alternative modes of revaluation. She has exhibited in solo and group shows in Australia, participated in art residencies in Argentina (2016), India (2018), Mparntwe/Alice Springs (2021) and will be a Labour Art resident at the Santa Fe Art Institute in late 2022. Her writings have been published in Art + Australia, Kohl Journal for Body and Gender Research, un Extended Review among others. Her essay on “The Migrant Material” was recently published in Jacqueline Millner and Gretchen Coombs’ edited volume Care Ethics and Art (Routledge, 2022).