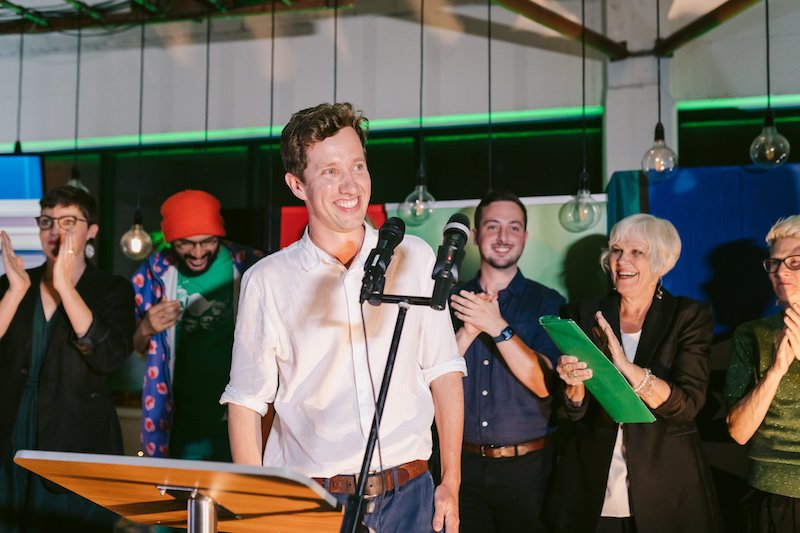 The recent federal election result was the best in the Greens’ history, delivering an increased national vote share, four federal MPs, and twelve senators. In particular, the result in Queensland – which saw an additional senator elected and the federal lower house seats of Griffith, Ryan, and Brisbane claimed by the Greens – took many by surprise. Queensland has long been considered a ‘conservative state’ – associated in the popular progressive imagination with coal mining and the Bjelke-Petersen government – and, until recently, the Greens struggled to make electoral inroads there. So what changed in 2022, and what lessons can other Greens movements and those in the broader left take from it?

The imperative to explain the shock result in ‘Greensland’ has been taken up by numerous journalists and commentators in the weeks following May 21. As someone heavily involved with the Greens’ grassroots campaigning efforts since 2016, I found that very few of these explainers and opinion pieces were successful in capturing not only the strategy in Queensland, but why it bore fruit. A notable exception is the coverage by Guardian Australia correspondent Ben Smee, who – along with his colleague Eden Gillespie – devoted significant time to understanding the Greens’ strategy in Queensland in the weeks prior to May 21.

Many others, in trying to interpret the shock result, fell back on the idea that the Queensland Greens were simply in the right place at the right time – that external factors conspired to more or less hand the party its success. The most common example is the argument that the February 2022 floods – which disproportionately affected the riverside suburbs in all three seats – brought home the reality of climate change to otherwise apathetic voters. Another argument claims that the lack of teal independent candidates meant that traditional Liberal voters concerned about climate change had no outlet but the Greens. Others have pointed to demographic changes, with a new generation of young voters turning out to the polls and the influx of progressive young people from Sydney and Melbourne moving to Queensland during the pandemic; a particularly bizarre piece in Crikey attributed the Greens’ success in Ryan partially to a pedestrian bridge constructed in 2006.

The common implication of all these arguments is that progressive political change happens largely without ordinary people pushing for it; that campaigners’ ability to move the electoral needle is limited or at least reliant on external conditions. While this of course is true to some extent – people make their own history but not in the circumstances of their choosing, and some seats are more or less winnable based on a number of demographic, social, and economic factors – it risks imbuing the ‘Greensland’ result with a narrative of fatalism. This ignores the very powerful work done by campaigners in actively winning new voters.

The issue of climate change provides an instructive example. The 2022 federal election was my sixth campaign spent doorknocking for the Greens, and up until around the end of 2021 – that is, seven months into the thirteen-month campaign in Griffith – I would have said that climate change was not a vote-shifting issue. That is, people for whom climate change is a major concern are already voting Greens; among the others, it exists as a background issue of murky but not motivating concern. However, this time around I encountered more people than ever bringing it up at the door as the main issue on their minds ahead of the federal election. (There is, of course, a possible confirmation bias here, as voters might be more likely to tell a Greens campaigner what they think the campaigner wants to hear. That said, the marked increase from previous elections was notable.)

I began to notice this well before the February 2022 floods, and although it continued in the weeks afterwards, no one ever mentioned the floods as an explicit example. And importantly, while these voters were generally open to voting Greens – on the climate issue among others – the vast majority had not made up their minds. This is where the power of a well-organised ground campaign is crucial in shifting voters from consideration to commitment. In particular, doorknockers were trained in how to win progressive voters over from Labor – a key path to victory particularly in Griffith, which pulled off the significant achievement of pushing the incumbent Labor MP into third place. I’m confident that without the element of persuasive, vote-shifting conversations, the vast majority of potential climate voters in Queensland would not have shifted to the Greens.

At a broader level, the Greens campaign in Queensland was centred on the idea that changing people’s voting behaviour is possible – not because they can be persuaded to share our politics, but because many of them share it already. The basic social democratic values underlying the Greens’ policy platform were popular and widely held across virtually all the suburbs in Griffith where I knocked on doors. I’ve written elsewhere about the value of an empathetic and non-judgmental campaigning approach – one centred on meeting voters where they are and assuming a common humanity, rather than lecturing them on the ‘right’ position – and this remains, to my mind, the main ‘secret’ to the Greens’ success in Queensland over the past six years. Political commentators are often sceptical of doorknocking, but the recent result in Queensland makes its value hard to argue with.

Success in the suburbs

Another crucial yet underreported aspect of the Greens’ victory in Queensland concerns the progress made in outer-suburban areas, far from the riverside inner-city areas often considered to be the ‘natural home’ of Greens voters. Many analyses of the Greens’ success in Queensland have tended to focus on the areas within each seat containing large populations of young, progressive residents – West End and Highgate Hill in Griffith; New Farm, Fortitude Valley, and Paddington in Brisbane; and St Lucia and Toowong in Ryan.

It is true that the Greens recorded higher primary votes in these areas. However, to count this as evidence that the Greens won three new seats due basically to demographics – that is, the result of already existing populations of people who are Greens voters or primed to vote Greens with very little intervention – is to miss two key points. Firstly, in Griffith and Ryan, the higher primary vote generally overlaps with Greens representation at the state and (in Griffith’s case) council level. The high vote share in those areas has therefore been grown over time, through not only successive ground campaigns but also the hard work of elected Greens representatives. As a doorknocker in Griffith, it was notable how many residents of the Gabba council ward and South Brisbane state electorate told me that they had voted Greens at a previous election and now considered themselves ‘Greens voters’ because of the quality of their local Greens representation.

This made it easier to secure high primary votes in these areas, but it also indicates something important about the nature of politics, campaigning, and changing people’s voting behaviour. A key strategy of the Labor campaign in Queensland – particularly in inner-city seats where the Greens were a threat – was to position themselves as a ‘party of government’, able to make legislative change through holding a parliamentary majority (as opposed to a ‘protest party’ like the Greens). This, to my mind, represents a fatal misreading of what the average voter cares about in terms of politics. Most people I spoke to on the campaign were not at all swayed by the idea of voting for a ‘party of government’, because they were rightly suspicious and pessimistic about government in general. There was also an understanding of politics as necessarily, in some sense, aspirational – that it’s acceptable or even useful to have a have big, bold policy agenda that stands for some broader political vision to work towards. In Griffith, this belief was summed up in our slogan ‘If Nothing Changes, Nothing Changes’ – which itself was presented to the now-MP, Max, by a voter during a conversation at the door.

The other key point missed by analyses focusing on the inner city is the fact that the Greens are now the most popular party in many suburban areas within the three new federal seats. To take Griffith as an example – while the Greens generally recorded high primary votes of between 48% and 44% in the traditionally progressive suburbs of West End and Highgate Hill – our best booth result (54% of the primary vote) was further out in Buranda West. We also won on primary vote in the middle-ring suburbs of Greenslopes, Morningside, Holland Park Central, Holland Park East, Holland Park South, Carina, Stones Corner, Morningside South, Cannon Hill Central, Mount Gravatt, Coorparoo South, Carina Heights, Murarrie, and Seven Hills.

This widespread success, again, demonstrates the broad popularity of the policy platform among many different ‘types’ of voters – young people, people on pensions, families, workers, students, and so on. In fact, as a doorknocker and polling booth volunteer, one of the most valuable lessons involves unlearning this idea of voter types. That is, resisting the temptation to profile people on sight, but rather approaching everyone and seeing where the conversation leads. Myself and other campaigners all had many stories of knocking on a door or approaching someone at a polling booth with the expectation of refusal, only to be met with warm interest or support.

This is all to say that analyses seeking to slot voters into demographic groups (e.g. ‘knowledge class’, or ‘latte-sippers’) are necessary, to some extent, for the purpose of making large-scale arguments about voting behaviour. However, it would be a mistake to transfer that logic to ground campaigning. The Greens’ success in Queensland came not from targeted mailouts, robo-calls, or text messages, but from having tens of thousands of individual conversations, which were often rich and surprising. We never assumed the role of experts there to convince voters of our policies. Rather, we took the position that we had a lot to learn from the people we spoke to. In this way, the ground campaigning effort was valuable in not only bringing voters over to the Greens, but also in better aligning the party’s policies and messaging with what voters cared about. This was particularly true around the material issues of housing and the cost of living, crises which the ground campaign picked up on even before they became the subject of mainstream media coverage.

There are of course many more facets to the result in Queensland, and a comprehensive analysis would extend far beyond the scope of one essay. But to me, there are two major take-aways: first, political ‘experts’ know a lot less than they think they do; and second (not unrelatedly), doorknocking works. Large-scale, committed, high-quality campaigning works to shift people’s votes and change the political landscape, often in ways that no one except those on the ground could have anticipated. The result in Queensland was an upset to the political establishment, delivered not by dint of circumstance but by years of hard work by ordinary people. Our capacity to cause further upsets – both in Queensland and elsewhere – depends only on our capacity to organise with the belief that we can win.

Joanna Horton is a writer, Greens campaigner, and PhD candidate in sociology. Her work has appeared in Overland, Jacobin, The Millions, and StylusLit, among others. Her debut novel will be published in 2023.