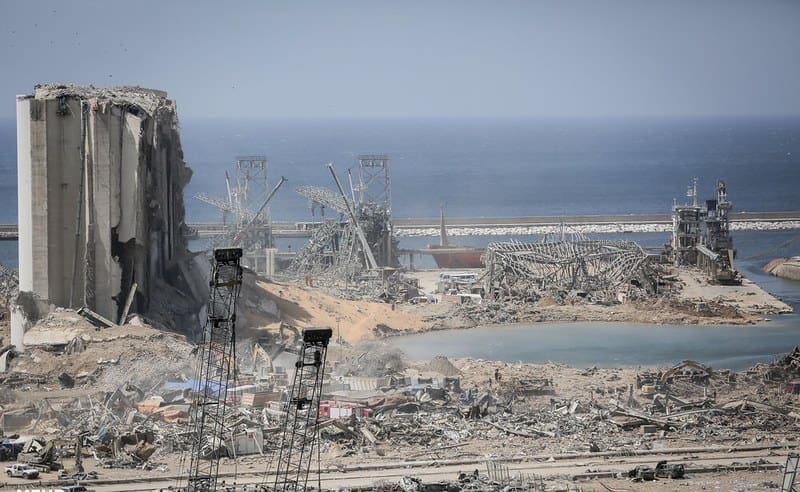 Some of the worst wildfires ravaged through the mountains of Lebanon in 2019, caused by extended drought, wind and unusually dry weather. The government’s response to this crisis mirrored every government service in the country, at best inadequate, and mostly non-existent. In 2020 more than 100 wildfires spread again throughout the mountains in the southern Chouf and in the northern Akkar regions. One fire however devastated the country the most, causing the explosion at the epicenter of Lebanon’s capital, Beirut on the 4th of August 2020. The Beirut explosion resulted in the death of at least 200 people, and injured 7,500. The explosion devastated indiscriminately against rich and poor, workers, passersby, drivers, people doing mundane things at home; Shia, Sunni, Catholic, Maronite, Orthodox, Druze among others, men, women and children of all ages and walks of life. The explosion destroyed heritage buildings and modern infrastructure, and left more than 300,000 people homeless. Beirut is left in ruins. The additional distressing pain, death and disease caused by the COVID-19 pandemic have rendered Beirut hollow, and unrecognisable.

The current Lebanese government has neither resigned nor accepted responsibility. Instead politicians have been using ministerial immunity in order to stifle the investigation into the causes of the blast. The explosion at the warehouse in Beirut’s port is at a minimum caused by negligence and incompetence, where 2,750 tonnes of ammonium nitrate were left unaccounted for in an insecure storage facility for more than 7 years. At the most the explosion is a criminal act and the ammonium nitrate might have been stored by one or more of the political parties for underground military use.

The current Lebanese government is constituted of the same political leaders who participated in the civil war. The government is principled in confessionalism and sectarianism, which is the residue of the Taif Agreement that concluded the civil war in 1990.  The Lebanese parliament has had the same speaker since 1990. The Lebanese government has been for decades run by rich oligarchs, elite families with a following of a certain generation who have a strong allegiance to their sectarian leaders; a trend that is becoming more and more obsolete among younger Lebanese.

Lebanon has been struggling from the effects of the unrest and violence in Syria, the constant Israeli military threat and increasing tensions in the region between Iran, the United States and their allies competing for geostrategic leverage. Further, these military and ideological tensions are mirrored and ever so present in the political terrain in Lebanon. The region is still struggling from the effects of colonialism and is marred by endless wars, and foreign interference of major powers. Syria is in ruins with no end in sight for the violence, Iraq devastated after years of war with endless violence and endless presence of foreign troops, Libya still struggling 9 years after the assassination of Qaddafi, and Egypt struggling with new forms of dictatorships supported by the United States and other western powers after the so called “Arab spring”.

These regional dynamics have had a strong impact on Lebanon and are some of the reasons Lebanon has become the country hosting the largest number of refugees per capita, with refugees from mainly Syria and Palestine but also from Ethiopia, Iraq and Sudan among others. The 4th of August blast and fire killed and made homeless families who are already fleeing from devastating circumstances, many who have survived wars and extensive violence. Refugees in Lebanon have already endured the country’s economic crisis, racism and hostility from local communities and have been used by politicians to gather more aid and donations, which mostly went into the pockets of the corrupt political elite.

Moreover, of the country’s 400,000 migrant workers who have already been struggling with Lebanon’s financial crisis and currency depreciation, 24,500 migrants lost their jobs, homes or were directly affected by the blast. With many of the Embassies neglecting their citizens and a Lebanese labor system that is deeply racist and unjust to say the least, there has been a relentless funding of grassroots campaigns helping many of these workers to return home. The blast has affected refugees and migrant workers the most.

Among the local population, a sense of loss and despair has set in. The diminishing middle class in the country, subsequent brain drain, and the effects of the blast and the financial crisis have had Lebanese leaving the country in droves. During one of my visits back home to Lebanon in 2017, I remember the overwhelming feeling that everyone wanted to leave the country, my cousins, the neighbors, friends and family. The majority of people I met were either waiting on or preparing to apply for a visa to go looking for a better life elsewhere. A sense of despondency that nobody wanted to stay. This exodus was exacerbated, even then, by the rubbish crisis that started in 2015 and is ongoing. And by the fact that Lebanon has had for example no 24 hours of electricity a day since the 2006 Israeli attack where the Israeli army brought the country’s infrastructure to its knees. We have not yet recovered from that destruction. The sense of hopelessness was prevalent when discussing the corrupt government with its corrupt political parties and their militias who have starved the country, leaving the younger generation with not much hope to build a life at home.

Rebuilding Beirut after the explosion is not going to be easy. Numerous Beiruti heritage buildings, the infrastructure, Beirut’s vibrant streets, cafes, restaurants, bars and nightclubs while challenging, will be relatively easier to heal and recover. The hardest part will be to make the city a livable place and the country an attractive home with a future for its young generation. This will not happen with the current political leadership. During other regional uprisings in the early 2010s, we would say, ‘look, they have to remove one dictator, we have to remove many’ referring to every corrupt Lebanese sectarian political leader. The Lebanese diaspora has a big role to play in the recovery process, and in discovering how the region will look living with COVID-19. It is the people who are suffering the most who are the ones putting their bodies on the line in the streets in Lebanon protesting and clashing with a militarised police state. They are the ones who will bring change.

The Beirut explosion happened on the backdrop of the 17 October 2019 revolution, a series of cross sectarian leaderless protests that fired up the streets started in Martyr’s Square in the center of Beirut and spread like a contagious fire for change across the country. Soon after, assemblies, marches, protests and debates on the streets ignited and spread to Tripoli, Saida and numerous other cities and towns across the whole country. The revolution even spread to the diaspora and we saw several protests in front of Lebanese embassies in major cities around the world. Thousands of people joined with demands ranging from electricity and infrastructure to jobs, civil rights to the resignation of the corrupt political elite among others. Chanting on the streets killon yaane killon (all of them means all of them) referring to the government and all the political parties. The chant symbolises a shift from sectarian preferences, where usually people blame every political party except their own. The revolution marked a significant transformation in how politics are discussed.

The association of the bereaved families of the victims of the blast have been protesting and calling for justice, helping to reignite the revolution. The bereaved families have been asking for a just and fair investigation into the reasons for the blast and to know who are the authorities responsible for the incompetence and the negligence. Protests have been igniting all over the country in the past few weeks, against the economic crisis and the tragedy caused by the COVID-19 pandemic. Providing bereaved families with a fair and just explanation about the causes of the explosion will only be a mere first step towards rebuilding and hope that in its turn will only come through resistance and struggle.

Fires don’t only burn, destroy and kill, they can act as catalysts for re-imagining and replanning of post-crisis. After a fire’s nihilist impact, there are possibilities of rejuvenation and hope for those who survive. However, these possibilities are only conceivable once justice is restored. The Lebanese government needs to resign to give the country hope, ministers and ambassadors need to resign; killon yaane killon, allowing a new generation of political leaders to emerge and to experiment with a new form of government, a form of government that is not based on sectarianism and foreign allegiances and interferences, but one rather built on civil rights, civic freedoms, and social justice.