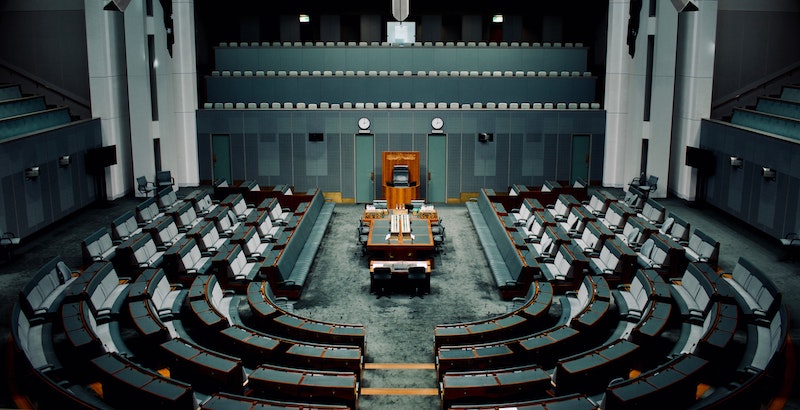 Tim Dunlop provided a keynote address at the Green Institute conference, Reclaiming Democracy, in 2019. In this talk he discusses how citizen assemblies and sortition can help cultivate democracy in a fractured world.

I’ve been asked to talk about the idea of citizen’s juries, or citizen assemblies, a form of democratic participation that I strongly support. In particular, I’ve been asked to say something about sortition, which a method for choosing those who participate in citizen juries or assemblies.

To start, I want to put this into the context of collective versus individual actions.

Citizens’ juries aren’t just about giving people a voice in the political process. They are just as much about collective action and the pleasure of coming together and solving the problems that confront us.

One of the triumphs of neoliberalism has been to isolate us and convince us that all aspiration is personal and individual, whereas in fact, there is satisfaction to be found in the simple act of coming together and taking responsibility for our own future.

People who whinge that street protests don’t achieve anything concrete overlook this aspect of collective action.

Collective is the point.

Oscar Wilde once said that the trouble with socialism was that it required too many meetings, and I think we can all relate to that. Wilde’s comment was part of an argument that said, outsourcing our democratic participation via representative democracy frees up our time for other things.

Maybe it does, in some limited sense. But it also deprives us of the joy of participation.

It has led to the problems we have now, where power is concentrated in a few hands amongst an elite who pursue their own interests, and all that free time we allegedly have is probably been spent in holding down precarious and poorly paying jobs in an increasingly insecure and financialised economy.

Let’s look at that notion of representation as it currently operates, so that we can better understand the benefits of assemblies and sortition.

Whatever axis you look at it––gender, ethnicity, occupation, religion––our parliaments don’t look like us.

At the most basic level, they don’t properly represent us.

Which is a pretty major flaw in a system of representative democracy.

It is hardly surprising, therefore, that people disengage from what parliaments do, from what politicians say, from the whole messy business of governance.

This sorry state is the by-product of the very thing we think of as the bedrock of democracy: voting.

So we need to rethink the role of voting in our understanding of democracy.

Voting isn’t the most important thing in our democracy and I will tell you why.

Voting entrenches elite rule. That’s because when we vote, we are in effect handing power to small groups of people, the two major political parties and the people who ‘influence’ them.

Over the last few elections, Australians have tried to break this two-party control, and to some extent have been successful.

At the 2019 election, just under a quarter of the electorate voted outside the major parties in the lower house.

Nonetheless, the ALP and Coalition took over 95% of seats because of the preferential voting system.

More democracy means more participation by more people, and part of the way we achieve that is by remembering the origins of democracy itself, what it was and what it wasn’t.

In Ancient Greece, amongst those who invented democracy, most offices holders were decided not by voting but by drawing lots.

It sounds weird, but for the Ancient Greeks, voting was seen as anti-democratic.

Instead, they used a lottery, and it meant that everyone, at some time in their life, got to be part of the government.

Democracy is self-rule, and the essence of that is that everyone gets to govern, not just be governed.

Voting doesn’t achieve this, but random selection does. It is sometime called sortition, which simply means to sort.

As Aristotle said: Voting leads to oligarchy. Only random selection leads to democracy.

We can take a maximalist or a minimalist approach to sortition.

A maximalist approach would see us replace the current voting system in one or both houses of parliament with a system of random selection, so that, for instance, Senators would be chosen from the population at large in the way that we now choose members for a jury.

A minimalist approach would see us establish adjunct houses of parliament––peoples’ houses––where we all get to serve at some stage in our lives, chosen by lot.

The reason such bodies can be powerful is because of something else we tend forget, and it was articulated by American commentator and writer, Christopher Lasch:

‘Of course it needs information too, but the kind of information it needs can be generated only by vigorous popular debate.

‘Information, which is usually seen as the precondition of debate, is better understood as its by-product.

‘When we get into arguments that focus and fully engage our attention, we become avid seekers of relevant information.’

A peoples’ house based on sortition allows this sort of public deliberation and information seeking. It brings in experts and advocates on certain issues and lets them make their case to the citizens present, and it allows those citizens to question the experts and advocates, to also argue amongst themselves about what they have heard, before deciding on an outcome.

It is deliberation for an outcome, not negotiation for a vote.

The obvious comparison is with the jury system. A representative sample of citizens hear from experts and witnesses from all sides and make up their own minds and render a verdict.

Did you see that clip of Alexandria Ocasio-Cortez grill Mark Zuckerberg the other day?

Part of the joy of that was that she was doing it in an environment where the rules of engagement require accountability in a much more compelling way than anything that happens in Question Time or in most media interviews.

That wasn’t a citizen’s assembly, it was a Congressional Committee hearing, but assemblies utilise similar rules of engagement, with the added bonus of the direct participation of citizens themselves.

Various nations, including ours, already do this sort of thing in the form citizens assemblies or citizens juries.

Recent successful ones include the one held in Adelaide on the whether or not South Australia should accept the world’s nuclear waste for storage. Another was the Irish assembly that led to their constitutional ban on abortion being overturned.

Ultimately, we need to entrench such assemblies as an ongoing part of our governance processes, something that happened recently in Belgium.

A peoples’ house, where we all get to have a say, is the embodiment of the idea of self-rule, the very thing democracy is meant to be.

The bottom line is this: the neoliberalism of the last forty years, whatever its intentions, has created a world that we do not want.

And despite our ideological divides over how to attain them, our desires are, for the most part, straightforward and widely shared and worth stating as simply as possible:

We want meaningful work, restorative leisure, and a loving circle of family and friends; we want others to have those things, too, and we want a planet that can sustain this kind of life.

As Astra Taylor said in a recent interview, both Plato and Aristotle noted that the overwhelming majority of people who made up the Athenian demos were not wealthy. Rule of the people, is therefore, by definition, the rule of the poor, ‘since citizens of modest means are bound to vastly outnumber the rich.’

Rule of the poor. How radical is that?

Citizens assemblies based on general participation through sortition are the institutionalisation of that utopian politics.

Let’s get together in citizen assemblies and talk about it, and change the world from the bottom up.