Australia’s magnificent biodiverse and carbon-dense public native forests are facing a critical moment. The catalyst being the state by state re-evaluation of the 20 year old Regional Forest Agreements (RFAs), over the next two years.

What are Regional Forest Agreements?

RFAs have had the effect of being contracts for forest devastation.

RFAs were a response of the Keating Labor government to the pressures from the forests industries and CMFEU at a time when 80% of citizens opposed woodchipping. Commonwealth legislation created agreements with the states which exempted RFA areas from Commonwealth environmental protection laws ((Environment Protection and Biodiversity Conservation Act 1999)) while providing for new national parks at that time. The states were to be responsible for environmental protection. In practice the States have given priority to logging over other values such as water, soils, canopy cover, biodiversity, and certainly not climate degradation or carbon sequestration. There have been hundreds of breaches of environmental prescriptions documented with scant response. Compensation for up to 20 years is legislated for the loggers/woodchippers if there is not enough forest left to destroy. RFAs took no account of the extensive forest degradation that had already taken a toll on forests. Forestry scientists at the time warned that the agreements would be inadequate for protecting the forests (or for the prescribed future wood supplies). TimberNSW, a timber industry body, makes a similar current observation on their so-called fact sheet this year that timber supply is “expected to run out before 2018”. Let’s hope they are not looking over the fence at the national parks!

While the RFA process provides a timely window of attention on native forests, its assumptions and outcomes are wildly outdated in the light of scientific evidence and pressing world and regional problems. So the choice is a further 20 years of destruction or – with an expanded and pragmatic orientation – valuing and preserving our forests for their life-giving contributions to water, clean air, fecund soil, wild diversity, climate stabilisation, carbon storage and human inspiration. The key is switching the management of our publicly owned forests from timber extraction to allowing their natural capacity to mitigate climate and sequester carbon – a change, firstly in consciousness, then policy and practice suited to these critical times and reflecting recognised planetary roles of forests.

Forests are vital for human survival. Two major nature-based systems stabilise climate – oceans and forests. The oceans are becoming acidified; however, we can protect forests. Forests are living planetary organs which ensure homeostasis and so the conditions for Life as they draw down atmospheric carbon dioxide, store it as terrestrial carbon, and breathe out oxygen. Globally, forests are depleted to 1/8 of their size from the beginning of the Industrial Revolution so their present protection and expansion is imperative. In essence, it is time to stop logging all public native forests and enable nature to do what nature does best. 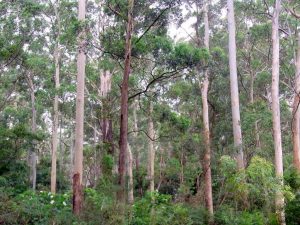 The context for forests campaigning is very different this time. Valuing of nature, particularly among the young, is common place. Communication is networked, instant and easy, enabling nationwide and focused collaboration. Social media gives alternative sources of information to mass media juggernauts with vested interests. Models of successful campaigning are known and can be wisely copied. Coalitions with other nature valuing campaigns can be built with mutual benefit at the community, state and national levels. Important lessons have been learned – never again trade POWER for PROCESS – as in the 1995 trade-off which led to the RFAs.

A process pathway can be highly valuable when there is little political power accessible or where the issues are complex and slowing down allows an expanded, inter-related picture to be perceived. However the pitfalls of the process pathway are many. When there is a build-up of political power, be it due to an effective community/national campaign, direct action, fortuitous media amplification or lucky timing that power opens doors for valuable outcomes. Entering a negotiation process can be a side-step to what you are aiming for – rapidly it quashes any accumulated potency and advantage as the issues goes dead.

The huge loss of forests already gone is not the starting basis for discussions and the negotiation is a tedious scramble for what is left.

In the case of forests, agreeing to a process immediately concedes that most of the forest goes to the chop – before arduous talks have even begun. The huge loss of forests already gone is not the starting basis for discussions and the negotiation is a tedious scramble for what is left. It makes it too easy for reluctant governments to deliver some concessions, often unwanted or previously logged/trashed forests and designate the rest for relentless consumption. Often the best informed activists are seconded and effectively silenced while public attention diminishes. Process, for forests, operates within highly limited parameters fenced in by spurious assumptions and a myopic frame of reference focused on a very small outdated worldview. Process is what you do when you have few options or when the process needs to slow down to allow integration and analysis of complexity. This time there are much better options of forests.

Generally, people want the environment protected, and trust in politicians to fulfill their responsibilities is low, so people’s minds are open to alternatives. They are our forests so it’s up to us to act now to protect them in perpetuity.

The Great Southern Forest (GSF) is a vision for the forests of south eastern NSW beyond RFAs and logging. The GSF proposal is a widely researched, solutions-based initiative advocating positive approaches to a complex of environmental, economic, cultural and social problems. It enables nature-based solutions with cumulative benefits in terms of climate stabilisation, environmental and economic health, increased resilience and biodiversity, regional employment, Indigenous participation and social coherence. It offers a new model of forest management which is relevant and transferable nationally and internationally. The Great Southern Forest can reduce forest fragmentation, thereby equipping forests as a whole with the connectedness and resilience to withstand and ameliorate a disrupted climate.

The GSF focus is the 432,575ha of south eastern NSW state hardwood forests. We, the public, own these forests. The present system of management of these native forests for timber extraction has overseen inestimable damage to soil, water, biodiversity, wildlife and habitat with parallel brakes on social and economic well-being. Importantly, this is not a proposal for further national park reserves – it is a fundamental reframing of management orientation for our state forests which would concurrently allow diverse, benign use of the forests and so take some pressures off National Parks.

As has happened nation-wide, the south eastern NSW native forests have been prescribed by RFAs with attendant myths of ‘sustainable logging’ and using ‘waste wood’. Yet, around 80% of trees felled go to Australia’s oldest woodchip mill at Eden and thence to the rubbish dumps and polluted skies of Asia. When the RFAs were negotiated two decades ago, climate change and carbon economics were not commonly recognised. Now mature plantations meet all of Australia’s timber needs. ((Ajani J (2007) The forest wars, Melbourne University Press, p.134.)) and locally, State-owned mature plantations at nearby Bombala are in production. Most Australian timber workers are employed in plantations. ((Ajani J (2007) The forest wars, Melbourne University Press and Ajani J (2010) ‘Australia’s forestry crisis – how it happened and what to do’, Fenner School Series, ANU.))

Analysis of Forestry Corporation NSW’s reports show its native forest operations in the south east lost $79 million in 7 years. The few private loggers and millers lost a further $1.4 million in 2012 despite accessing publicly subsidised logs. Perversely, our money is used to heavily subsidise forest destruction. Clearly, managing these native forests for timber/woodchips is an economic basket-case and environmentally criminal.

All forests sequester carbon. However there is a gross reduction in carbon stocks due to logging as unlogged forests are known to contain three times more carbon than logged forests. Additionally, logging contributes to greenhouse emissions. Research shows that ceasing to log South East NSW native forests could save up to 2 million tonnes of carbon dioxide emissions per year. ((Keith, H., Mackey, B.G., Lindenmayer, D.B. (2015) “Re-evaluation of forest biomass carbon stocks and lessons from the world’s most carbon-dense forests”, PNAS, 106(28).)) The climate aspects are not just about carbon losses. They are also about the impacts of broad-scale logging on rain-making, water collection and filtration, and hence on the warming and drying of the regional climates, such as is experienced in SE Australia. These reasons alone are enough for common-sense to dictate the cessation of all native forest logging, not just iconic forests.

Yet additionally, at a conservative auction price of $10-12 per tonne, these avoided emissions could earn NSW a gross income of over $20million a year. ((Perkins F and Macintosh A, (2012) ‘Logging or carbon credits. Comparing the financial returns from forest based activities in NSW’s Southern Forest Region’, The Australia Institute, Technical Brief No. 23, ISSN 1836-9014.)) The ecosystem service of carbon sequestration (the metric used by the Clean Energy Regulator) has a value for climate change mitigation both nationally and internationally. This service is accounted under the mandatory Kyoto and Paris Agreements, ((see Kyoto Protocol, Art 2(1)(a)(ii); European Commission, Climate Action, Forests and Agriculture; Money Doesn’t Grow on Trees.)) and priced under the Emissions Reduction Fund. ((Keith H, Lindenmayer DB, Mackey BG, Blair D, Carter L McBurney L, Okada S &amp; Konishi-Nagano T (2014) ‘Managing temperate forests for carbon storage: impacts of logging versus forest protection of carbon stock, Ecosphere, 5(6):75)) However, at this point carbon credits for avoided logging are designed primarily for private land-holders. Also caution is required in using the present system for forests more widely. With a government ideology of paying the polluter and assessment being primarily on economic grounds not environmental, the process could be opened for gross misdirection, namely further logging in a different area.

separateness is the metaphysical base of our present form of adversarial democratic government leading to dissociated decisions, war mentality, abuse of people and nature, and resultant climate change

The common framing of tensions between ecological values versus economics or jobs does not apply. If the focus of forest management is transformed to climate stabilisation and carbon sequestration, research indicates improved economic benefits and on-going employment in pride-making forest jobs especially significant for existing workers, young people and for Indigenous people to work on Country. New Zealand stopped native forest logging on the west coast of the South Island in 2002. Data indicate that significant jobs in ecotourism have been created in response to the growing ‘experience tourism’ market. These are solutions which work environmentally, economically, socially, culturally and for employment.

The Great Southern Forest proposal is supported by an expanding, networked coalition of national and state environment groups, associated campaigns, academics, activists and community members – all urging common-sense to prevail in caring for nature and the forests. GSF can be followed on Facebook and has a website with the detailed proposal backed by relevant research papers and contact information for Friends of the Great Southern Forest 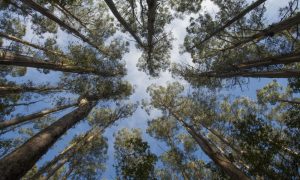 Importantly, forests are spiritually nourishing individually and for society-as-a-whole. Forests exude the profound and intimate interconnectedness of Life. Deep ecologists, Arne Naess and John Seed speak of forests’ ability to permeate and entrain the human mind to the visceral experience of connectedness. Interconnectedness is the organising dynamic of Life; it also underpins the four foundational tenets of the Greens. Simply put, we are not and never can be separate from each other and our enfolding environment. Yet, separateness is the metaphysical base of our present form of adversarial democratic government leading to dissociated decisions, war mentality, abuse of people and nature, and resultant climate change.

Interconnectedness as-an-experience is the key to the transformation in consciousness to do politics differently – and hence wise and compassionate exercise of democratic power. As the inner state of being changes, so does thinking, thence behaviours, social patterns, and in turn social institutions. Forests are models of living ecological wisdom and systemic, holistic self-organisation based on interconnectedness with outbreaks of creativity and unassuming beauty – they offer a model for democracy based on interconnectedness where there is a synergistic unity while uniqueness is upheld and cherished.